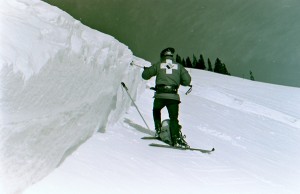 A few Vail Patrolmen check out a big slab in the Back Bowls, circa 1967. Photo by Dick Dennison.

If you’re like me, you listen to podcasts anytime you get a chance. Among my favorites is “Stuff You Should Know,” part of the Discovery Communications podcast network and hosted by a couple very cool guys, Chuck and Josh. They tackle all kinds of topics, and this week they discussed Avalanches on Stuff You Should know with the episode, How Avalanches Work.

During the podcast they mentioned that one of the ways to prevent avalanche danger was to purposefully set one off… sometimes by skiing along the fracture line. They wondered if any of their listeners had any experience with this and so I figured I’d write them. I don’t have much experience with this myself, but I knew ol’ Louie did, so I called him up and we crafted this letter to the Stuff You Should Know guys.

​In your Avalanche episode you mentioned that you might have a listener who had skied along the potential fracture line of a avalanche zone to try and set one off purposefully. I haven’t done that myself, because it sounds insane, but my dad used to do that all the time as part of Avalanche control when he was a ski patroman in the ’60s and ’70s at Vail and Aspen. Those were pretty wild times and he’s written a book about his experiences, with lots of cool old photos of the guys on patrol, called the Understories (www.TheUnderstories.com … It’s important to put the “the” in there … www.understories.com is not us!). There’s even a chapter on avalanches.

Trying to stomp a fracture line isn’t not done much anymore – if ever – at resorts in the U.S., but the idea is that one or two patrolmen ski quickly down to what they deem as the “breakover point” and then do a stomp turn, like a hockey stop, perpendicular to the slope, to try to trigger the avalanche to slab off below them. As you mentioned, it’s pretty dangerous. If it goes, hopefully it goes below you. As dad said, “You might go for a little bit of a ride, but most of the time you were ok.” Other patrolmen would wait up top in case of a need for rescue.

For a long time it was done in certain circumstances, in smaller slide areas or simply because there wasn’t a need (or budget) to blast every spot every time. Some resort officials wanted patrolmen to have “Avy cords” that were parachute cords that had inch and foot markers on them, presumably so you could tell how far away the avalanche victim was, and could follow the rope to where he was buried. Dad refused to wear any safety gear because, as he said, “What’s the point?” Beacons and Avalungs didn’t exist yet, and the patrol didn’t even carry shovels most of the time. Along with dynamite, shovels, and skis, he and his patrolmen kept Vail’s virtually treeless back bowls, and the front side too, safe from avalanches.

They also boot-packed back then… walking up the slopes and stomping the snow down with boots or skis in the autumn to create a secure base layer. They still do this at Aspen Highland’s bowl, because the terrain isn’t conducive to running snowcats and groomers.

You guys did a good job with Avalanches, especially for couple guys living in Georgia. I went to college there and there’s not a lot of snow knowledge down that way ha ha. Anyway Avalanches are taken very seriously in Colorado, and we have more deaths per year than anywhere else in the United States, by some measures the most in the world. Sadly, we have lost too many good people to avalanches, and we hope every year to improve safety and reduce the risk – but the forces of nature are unpredictable and not to be trifled with.

You can check out the podcast on Avalanches on Stuff You Should Know here, and you can read more about Avalanches in The Understories, as well as in Dad’s favorite avalanche book: Snowstruck: In the Grip of Avalanches by Jill Fredston.